Call it a soaring love story -- or perhaps “romance on the rim.” A pair of Peregrine Falcons has returned to Tallulah Gorge State Park for breeding season, just in time for Valentine’s Day. 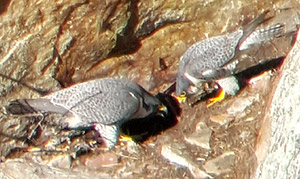 TALLULAH FALLS, GA., February 13, 2018 -- Call it a soaring love story -- or perhaps “romance on the rim.” A pair of Peregrine Falcons has returned to Tallulah Gorge State Park for breeding season, just in time for Valentine’s Day. Even though the raptors mate for life, they keep the spark alive with elaborate annual courtship.

“The male will spend about a month impressing the female, even if they’ve been together many years,” said assistant manager Jessica James. “He’ll show off his hunting skills with aerial acrobatics. It’s pretty amazing since these are the world’s fastest animal. In steep dives, they can reach speeds of more than 200 miles per hour.”

Three years ago when they were first spotted in the park, birders flocked to get a glimpse of the rare sight. It was the first time in nearly 75 years that a Peregrine nest in a natural setting had been confirmed in Georgia. The only other known nests were atop city buildings.

Visitors may bring binoculars and observe the raptors from the South Rim Trail; however, rock climbing has been suspended to encourage breeding. Guests may want to stop at the Interpretive Center first to get directions and viewing tips. On February 18, park rangers will lead a program and hike for guests to learn about, and hopefully see, the acrobatic couple. Additional programs and guided hikes will be posted to GaStateParks.org/TallulahGorge.

Peregrine Falcons practically disappeared from the eastern United States a few decades ago, primarily because of the effects of the pesticide DDT, but also because of egg collecting. By the 1960s there were none nesting in the eastern United States. Nest sites, called eyries, are normally on cliff ledges where the young are safe from predators. Yet in urban areas, peregrines have also adapted to nesting on buildings, bridges and other structures. Georgia’s last known eyrie in the wild was found in 1942 in a gorge – likely in the area now known as Cloudland Canyon State Park – in the state’s northwest corner.

Biologists and birders are excited about the pair’s return to Tallulah Gorge State Park. In the late 1980s and early 1990s, the Department of Natural Resources and conservation partners released Peregrines in north Georgia, including Tallulah Gorge, and in Atlanta. The first successful nest recorded as a result of these efforts was on the Marriott Marquis Hotel in Atlanta in 1996.

Tallulah Gorge State Park is located off Hwy. 441, south of Clayton. Parking is $5 and camping is available. Nearby Black Rock Mountain State Park opens for the season on March 16, offering camping and cabins. To learn more, visit GaStateParks.org or call 706-754-7981.