Out My Backdoor: Mulberries Get No Respect (But They Should) | Department Of Natural Resources Division Skip to main content

Out My Backdoor: Mulberries Get No Respect (But They Should)

We Americans are fickle. We seem to jump from fad to fad. For a time, something like poodle skirts or pet rocks will be the rage only to fall out of favor and be forgotten a few years later.

Take mulberries, for example. In the not too distant past, mulberry trees were found growing in backyards throughout the state. Additionally, since they make super shade trees, they were also planted in city parks and school yards.

However, today, whether I am strolling through a quiet neighborhood or sun-dappled woodland, I rarely come across a mulberry tree.

My wife, Donna, recalls a particularly large mulberry tree that grew in the yard of her elementary school. During recess, she and her fellow students would dine on the sugary berries. After eating their fair share of the tasty treats, she and her classmates would return to class with red-stained fingers. 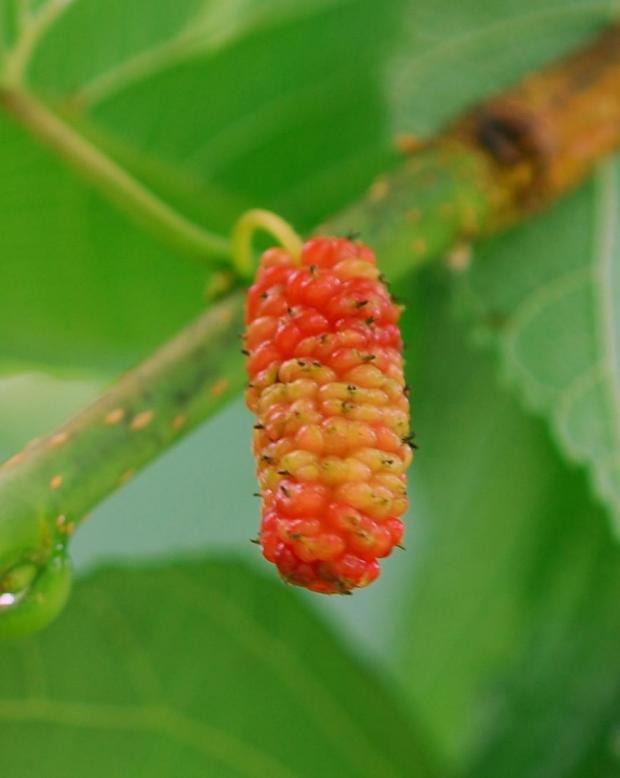 I can somewhat understand why mulberries are no longer popular. The berries will discolor cement paths, clothes hanging on the line; in fact, just about any surface. Also, most of us have yards that are much smaller than those enjoyed by our parents and grandparents. Consequently, a single mulberry tree that can soar 30 feet or more above the ground is too large for the postage stamp-sized backyards that are the norm today.

Yet another side of me says, if you have the room, why wouldn’t you want a tree growing in your yard that produces a bounty of tasty berries and is rated by the Cornell University Laboratory of Ornithology as one of the top seven most-important plants for birds?

Fortunately, my wife and I live on 3 acres, more than enough space to accommodate a large mulberry tree. Over the years, mulberry trees have popped up in a number of locations where birds have left behind droppings containing mulberry seeds. However, until recently none of these trees had produced any fruit. A few years ago my wife discovered that one of the mulberry trees we had allowed to grow was sporting a few 1½- to 2-inch-long berries that looked much like blackberries. Each year since, as the tree has grown larger, it has rewarded us and our wildlife neighbors with more berries.

This year it looks like the tree will bear hundreds of berries.

Georgia’s native mulberry is the red mulberry. Its leaves are rough on the upper side and hairy on the underside. The tree’s fruits turn dark red. Male and female flowers can be found on the same or separate trees.

An Asian import named the paper mulberry can sometimes be confused with the red mulberry. The leaf surfaces of this plant feel like sandpaper and are hairy on the underside. Its leaves are shield-shaped.

During the 1600s, the white mulberry and silk moths were brought into Georgia and elsewhere in the Southeast in an ill-fated attempt to launch the silk industry. The silkworm caterpillar feeds primarily on white mulberry leaves. These efforts were fostered by King James I. To further encourage the planting of mulberry trees, a law was passed in 1662 mandating that every planter who didn’t have at least 10 mulberry trees for every 100 acres he owned be fined 10 pounds of tobacco. On the flipside, plantation owners who produced 1,000 pounds of silk were granted bonuses of 5,000 pounds of tobacco.

A mulberry tree festooned with a crop of juicy berries is a wildlife magnet. In fact, some fruit and berry growers will plant mulberries next to their orchards as decoy trees. They know that birds and other wildlife will often leave their crops alone to dine on ripe mulberries.

More than 60 species of birds eat mulberries. This long list includes quail, wild turkeys, indigo buntings, tanagers, catbirds, mockingbirds, brown thrashers, bluebirds and great crested flycatchers, to name but a few. As many as 20 different species of birds have been seen dining in a single mulberry tree. Deer and raccoons, even opossums and chipmunks also partake of the sugary berries.

Mulberries are so important to squirrels that the planting of mulberries is often recommended to landowners who want to manage their forests for bushytails.

If you are going to plant a mulberry tree, I would recommend that you plant a native red mulberry. Its fruiting season is much longer than that of the white mulberry. In addition, many folks prefer the taste of red mulberries. It is also one of Mother Nature’s best health foods. A cup of the berries contains only 60 calories, yet is rich in antioxidants, fiber, vitamins K and C, potassium, riboflavin, iron, magnesium and potassium.

Meanwhile, the berries have a 10 percent sugar content. They can be used to make a variety of dishes such as jams and jellies, and an excellent wine. That is, if your wildlife neighbors are willing to share some berries with you.

If you have enough room, consider adding a red mulberry or two to your landscape. Although it might mean you will have to dry your Grateful Dead T-shirts in the dryer instead of the clothesline when the tree is fruiting, that is a small price to pay for such a valuable addition to your yard.