Archaeology Ongoing at the Vann House and Springplace Moravian Mission

Spring Place, Georgia, July 7, 2020 - The Chief Vann House has been the hot topic of conversation for many Spring Place citizens this June. Many readers have witnessed the archaeological crews doing excavation on Alt-52 near the God’s Acre Cemetery and the Vann House. It has long been known that James Vann, wealthy Cherokee plantation owner and merchant, built his 800-acre plantation more than 200 years ago and that his family welcomed the construction of the first school to Cherokee children, the Springplace Mission and School. However, there are extremely few maps and even fewer physical remains of this school and plantation to help us understand the people who first called Spring Place home. 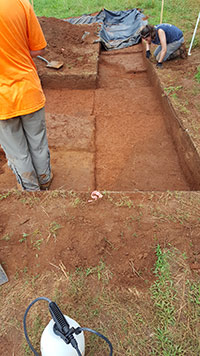 Today, federal and state laws are in place to help protect America’s cultural heritage. It is against state law to dig, artifact hunt, or metal detect on state property. As part of Section 106 of the National Historic Preservation Act, before a road can be built or expanded, before pipelines or power lines are installed, archaeologists must give construction crews clearance to continue. These laws help discover new archaeological sites and ensure that construction does not destroy those eligible for the National Register of Historic Places. Burial grounds, historic tools, building foundations, cooking hearths and even trash pits are vast sources of information for archaeologists to study. So, when the Georgia Department of Transportation planned to replace the bridge on GA-52 just south of the Vann House, New South Associates Inc. was contracted to perform excavations on the site as a result of the Section 106 process. They brought in Principle Investigator, Patty McMahon and a crew of archaeologists ahead of construction to excavate the portions of the sites within the footprint of the project. To help understand the dig on GA-52 Alternate, Vann House staff and volunteers reached out to McMahon to help answer the question about why dig at all and what archaeologists expect to find.

According to McMahon, portions of two historic archaeological sites, the Chief Vann House and the Springplace Moravian Mission to the Cherokee, will be impacted by the eventual road construction. The archaeological excavations are geared toward finding artifacts and other remains of past activity at the site (stains in the soil, called features) that can help answer questions about the people who lived and worked at the two sites in the early 1800s. The features are especially important for understanding the history of the site because they can sometimes be linked to a shorter time period or even a single event. The natural clay soils can make it hard to see some of these features, and excavation can be challenging, especially after the clay has been exposed to the summer sun and heat. Archaeologists are also looking for evidence of the interactions between European-American settlers, the Cherokee, and enslaved Africans that can tell us about how people of different backgrounds lived and worked side-by-side in the 1800s. These items may also tell us about how Cherokee culture changed in the years before forced removal from Georgia. Other information that could be learned from the site includes changes in land use over time.

Maps from the 1800s suggest that the portions of the sites being excavated were used as cropland and/or pasture when the mission was occupied. Before excavations started, archaeologists used ground-penetrating radar (GPR) to locate areas within the site that have a high probability for man-made features. The results from the GPR survey are one factor in deciding where to excavate at the site. The GPR identified areas that may represent possible structures, pits, and concentrations of artifacts.

Several different artifact types have been found so far at the site, although not many can be clearly dated to the time when the mission was occupied. Like the 1950s excavation at the Vann House, the most common artifact type from the current excavation are small pieces of stone as a result of tool making left behind by American Indian. Crafting or sharpening stone into knives, spear points, or arrowheads leaves small chips behind, and a large enough number of these chips may represent a camp site. Historic documents indicate that some Cherokee camped in the fields outside the mission; however, the artifacts could also be from earlier American Indian activity. Currently, archaeologists are also finding American Indian pottery, most of which looks like it was made before the mission was built. The pottery pieces collected from the site are usually small fragments broken up over many years of plowing at the site, and the small size can make it difficult to identify when the pottery was made. 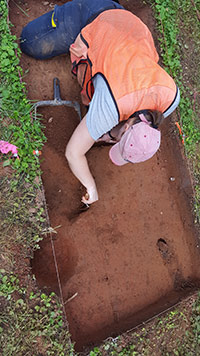 The crew has also found artifacts that date to the historic period. These include ceramics used as plates and as crocks, glass fragments from bottles and windows, various sizes and types of nails, and brick fragments. Like the American Indian pottery, most of these artifacts are small due to plowing over the years. The post-contact artifacts were probably associated with the occupation of the mission, although many of the artifacts being excavated were not made until after the forced removal of the Cherokee to Oklahoma.

Archaeologists also recovered items from the 1800s to the present. An early farm tool was identified, as well as nails, fencing wire, and aluminum cans. So far, archaeologists are excavating in what may be the cellar of a historic structure that was later filled in. There is still more work to do to find the edges of the possible structure. Some other soil stains have been identified in the field, but more excavations are needed to understand what activities in the past formed these features.

The archaeologists hope that the remaining excavations at the site will provide more answers about the mission and the changing lifeways of the Cherokee, the European-Americans, and the enslaved Africans who lived and worked at the site. Archaeologists are expecting to find additional features to better understand the layout of the mission and the types of activities that are recorded in the historic documents. Near the end of the project, a backhoe will be used to strip away the top layer of soil from larger areas to help uncover possible feature areas. Excavations are expected to last through most of July.

Please note that it is illegal to artifact hunt, metal detect, or dig for artifacts on state property.