What’s Father’s Day Like When You “Parent” a Park? | Department Of Natural Resources Division Skip to main content

What’s Father’s Day Like When You “Parent” a Park?

For rangers, their park is their baby. They guide how it grows and try to protect it from danger, just like a parent would. For many of the male park rangers, their fatherly duties extend beyond the park and into the home. Which is also ON the park.

Elliot Murrer has been a ranger for more than five years at Fort Mountain State Park in Chatsworth, Georgia, and has been the manager for the last two. In 2018 he and his wife Stefanie welcomed their first son, Briar, to the park. While Briar has not shown much interest in cleaning bathrooms and cottages yet, he has started eyeing a job in the maintenance department.

“We live near Fort Mountain’s maintenance building, so Briar is familiar with the equipment we use on the park,” Murrer said. “When he sees a backhoe or a tractor off the park somewhere, he gasps and quietly whispers ‘backhoe’ to himself in the backseat.”

Fort Mountain has more than 4,000 acres and 25 miles of trails. These trails serve as a playground for both Briar and his newborn brother Shiloh.

“It’s nice to be able to walk out your door and hop on a trail and go play in a creek,” says Murrer, who finds being out in nature is the best part of raising children on a state park. Other park rangers agree.

“We like to watch wildlife,” says Andre McLendon, manager at A.H. Stephens State Park in Crawfordville. McLendon has found the park to be not only a place to play but also an educational tool for his family.

“One thing I love is getting to show them how animals raise their families. I remember showing my daughter how a doe signals to her fawn by wagging her tail when danger is close by. I’ve also educated her about otters and birds we’ve found together on the park.”

McLendon has been at A.H. Stephens for 27 years, and his two daughters are grown now. He is grateful that he and his wife Shanta have taught them the extraordinary value of nature and public service, which has changed the way they approach the world today.

“My oldest has a degree in biology and the other is working toward the same degree,” says McLendon, “and my oldest is working to become a pediatrician.” He believes that his love for serving the public, and particularly the kids who visit the park, has had a profound impact on his daughters. While neither of his daughters are looking at a career in Georgia State Parks and Historic Sites, that’s not the case for all children of park rangers.

Steven Emery was raised at Panola Mountain State Park in Stockbridge until he was 8 years old, and then moved to Tugaloo State Park where his father Robert Emery was the manager. Steven is now the manager at Don Carter State Park on the shores of Lake Lanier. He has been a park ranger for Georgia State Parks and Historic Sites since 2013. Emery remembers inviting his friends over, renting out a campsite and having sleepovers in the campground.

“I never knew anything else,” says Emery. “Growing up, we spent a lot of time out in the woods and swimming in the lake. My friends now are kind of jealous when I tell them about my childhood, and it’s strange, but I sometimes wonder what it would be like to grow up in a subdivision.” Now, Emery and his wife Brandy are parents to their 1-year-old son, Logan. Emery is looking forward to the same joys for his son as he had as a kid.

“I like that my Dad worked across the street from our house, and I’m happy that my son also knows his dad is never far away. We get busy, but at least I’m not locked in an office an hour away.” The rangers like the atmosphere of the park.

“It’s a secure and safe environment to raise kids,” says Mike Gardner, manager of Sweetwater Creek State Park since 2020 and park ranger since 2016. While there are perks to having their kids nearby, it can also be hard for them to see their parents leave to resolve late-night problems on the park. Gardner knows it can stress out his family.

“It’s not always convenient, and the 3 a.m. calls can be hard,” says Gardner, who has a teenage daughter, Clara, and a 9-year-old son, Rhys. “At Sweetwater, local police often call us first if there’s a missing hiker or something serious on the park, because we’ll be the first one on the scene.” But even with these challenging responsibilities, he realizes the value living out in nature has given his children.

“My son has grown more outdoorsy over the years. He now asks to go on hikes which has been a change,” says Gardner. A few months ago, Rhys found a non-venomous baby king snake in the yard.

“He came up to me and calmly said ‘there’s a snake in the yard.’ I was pretty surprised at his reaction, because in the past he might have had a meltdown, but he’s become more normalized to nature. He understands not to be fearful of it, that it’s not out to kill us.” Like McLendon at A.H. Stephens, Gardner loves to show his kids wildlife around the house. When he was the assistant manager at Fort Mountain, he often would wake Clara and Rhys up to show them some visitors in the yard.

“We would have bears early in the morning, they thought it was really cool,” says Gardner “I like that they are actually living in nature.” 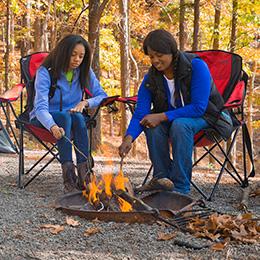