When we think of a soft breeze, we tend to think of it as nature’s way of giving us a pat on the back. For Georgia State Parks and Historic Sites’ (GSPHS) resource management unit, this pat on the back can turn into a punch in the gut if they aren’t paying attention.

“I’m always thinking about the wind when I’m working on a burn,” says Dahlonega Gold Museum site manager Heather Abercrombie, who also works on the burn team for GSPHS. “If someone is talking to me about something, I might not hear them because of how focused I am to what’s going on around me. The fire can completely turn on you if you’re not careful.” Abercrombie is often responsible for keeping look out for fires outside of the intended burn area or changes in weather patterns. She also helps with the difficult job of digging firebreaks, which are trenches that keep the prescribed fire under control. So why are prescribed burns conducted? It starts with a history lesson.

Indigenous Native Americans in the present-day United States utilized ground fires to clear for meadows and to open forest floors. They realized the importance of this practice for agricultural, hunting and forest ecosystem preservation. European settlers learned from them and kept these practices up until 1905, when President Teddy Roosevelt established the US Forest Service and made one of the primary goals to limit fires to “protect” forests.

This turned out to be a mistake, as ground fires are helpful to reduce the chances of extreme fires by burning off low-lying fuels. Through tree-ring analysis, dendrologists (tree scientists) can see scarring that occurred from ground fires. It turns out that many trees survive multiple, if not dozens, of small fires in their lifetimes. However, if highly flammable ground covering builds up over many years, it can result in massive fires that burn down entire forests. These extreme fires can destroy neighborhoods.

It is becoming apparent that the fire suppression policies of the 20th century, coupled with the more frequent and severe droughts caused by climate change, have led to the devastating and consistent wildfires we have seen in the American West.

Burning patches of forests is also beneficial to a forest ecosystem. Prescribed fires stimulate the growth of herbaceous plants like wildflowers and grasses, which are the foundation of a healthy wildlife ecosystem. Wildflowers are useful for pollinators like moths, butterflies and bees, and their health has impacts up to the largest animals of the Georgia forests such as bears and deer. An example of a species that requires consistent burns to thrive is the threatened Gopher Tortoise.

Gopher tortoises are a keystone species because they dig burrows that can house hundreds of other species including indigo snakes and owls. These burrows are vital for south Georgia ecosystems, partly because they serve as useful places to hide from the extreme ground heat caused by burns. Gopher tortoises feed on the flowers from herbaceous plants that grow after burns and distribute seeds across the forest floor. If ground fires don’t occur, a forest will get a dominant understory of one or two plant species and severely limit the growth of herbaceous plants that gopher tortoises feed upon.

At Panola Mountain State Park, through prescribed burns and planting of wildflowers, volunteers and staff have managed to create an artificial prairie that is geographically diverse to most of metro Atlanta. Scientists and researchers can often be seen at the “Power of Flight” area to count indicator species such as butterflies and birds. 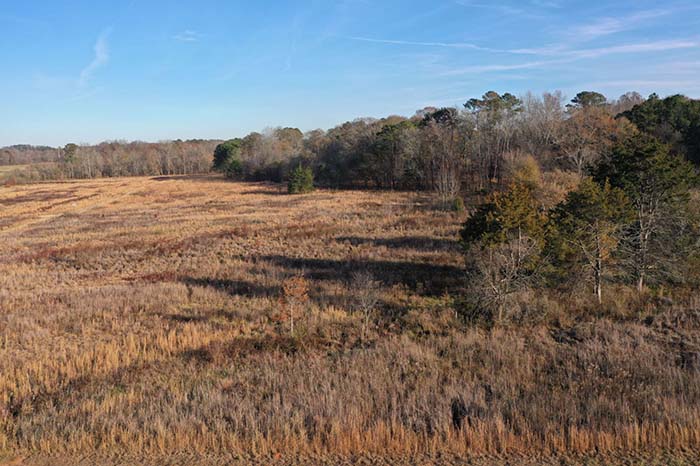 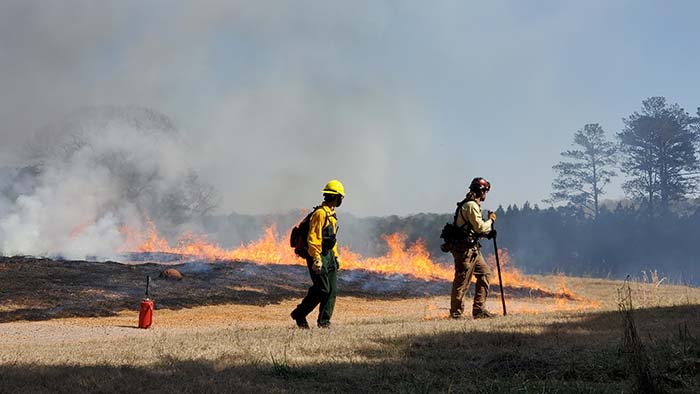 The Power of Flight grassland at Panola Mountain State Park is maintained through mowing, burning, and planting native grasses by volunteers and staff. 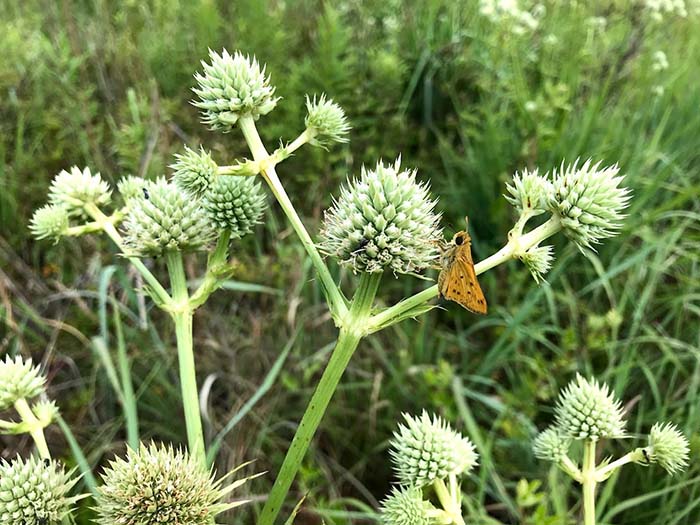 When deciding where to burn, an area like Panola Mountain’s Power of Flight is chosen because of several factors.

“We tend to look at the habitat type, the plants that are there, and the landscape,” says GSPHS Northern Resource Manager Phil Delestrez. “Longleaf and shortleaf pines are a good indicator there have been burns previously. Grasses such as Indian Grass is another clue that it might be a good time to burn. But I’ll also look at the landscape. Are there lakes, streams, roads or trails that we can use? These natural firebreaks are helpful when trying to control a fire.”

Delestrez is typically the burn boss when the crew executes a burn. This involves assigning jobs, giving feedback, and monitoring the fire and smoke. Fire is often thought of as the only danger when burning, but the smoke can have a detrimental effect on nearby homes and roads. Delestrez and his crew pay equally close attention to the smoke dispersion as the actual fire itself.

“The conditions might be fine during the day, but if there is a high probability for fog at night, it affects our ability to burn,” says Delestrez. “Fog and smoke together can make the roads very difficult to navigate and dangerous for motorists.” The Georgia Forestry Commission developed a smoke modeling system called VSMOKE which GSPHS teams use to assess how variables such as ground fuels or weather will impact smoke creation. Without this technology, the heavy smoke these burns create can cause negative health effects on people in surrounding homes or make the roads impassable.

Even with this technology, before Delestrez and his team gets started with a burn, they will often light a small test fire and watch for a few minutes to see how it reacts with the land.

“All the conditions may be perfect, but if the ground fuels are too dry and acting too volatile, we will call off the burn,” says Delestrez. “And other times, the fuels may be too moist to burn. It just depends on the place; each burn is a little different.” In south Georgia, the burns can be much more intense than those in north Georgia because of the soils and plant biology.

“In the piedmont and mountains, the soil is clay based,” explains Braxton Barden, the Southern Resource Manager for GSPHS Natural Resource Unit. “As you go south, the soil becomes much sandier. Clay is better at holding water than sand, so the soil is much drier in the south Georgia environments.”

Plants in the coastal plain have evolved to have waxy leaves to hold more water because of those dry soils. Saw palmetto bushes are a great example of the waxy leaves, which dominate the forest floor in the south Georgia longleaf pine stands. After the wax burns off the leaves and releases a bit of water, there is not much water in the ground to tamper the flames.

Barden encourages people not to be alarmed by the intensity of some of these burns.

“But by burning in these areas, we are simulating the natural ground fires that have occurred by lightning strikes for thousands of years. It promotes diversity in the understory. And historically, it’s part of the culture in south Georgia.” Historical publications show the national, state, and private forest industries were confounded as to why southerners would let fires burn the understory.

In 1940, the USFS sent out psychologist John P. Shea to try to understand why people in the south continued to burn even after thousands of dollars were spent on fire suppression and trying to change southerners’ attitudes. Here is an excerpt from a 1940 edition from American Forests:

“Fires do a heap of good,” continued my “patient.” “Kill the boll weevil, snakes, ticks an’ bean beetles. Greens up the grass. Keeps us healthy by killin’ fever germs.”

Studies as recent as 2019 have shown that the presence of consistent prescribed fires is shown to reduce the risk of tick-borne diseases and tick abundance. The article continues:

Their particular culture employs outmoded agricultural practices based upon the tradition of their forefathers who believed in woods-burning… They are the defensive beliefs of a disadvantaged culture group.

Southerners knew the importance it provided to the ecosystem and the people living within it. 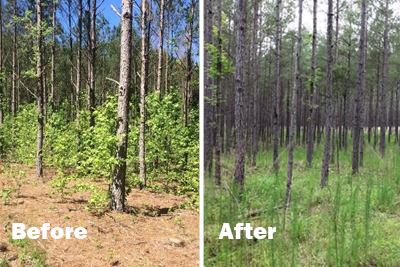 Chattahoochee Bend longleaf pine unit. In the ‘before’ picture, sweetgum maple saplings were taking over the understory. Now, native grasses and plants such as the bluestem, rosinweed, and milkweed are beginning to flourish.

As policies change and more science comes to support prescribed burns, it is likely more people will be asked to help. Before Heather Abercrombie worked as the site manager at Dahlonega Gold Museum, she was a hotshot for the USFS in the Cherokee National Forest. The hotshots are known as the “special forces” of firefighters. When Abercrombie worked there for two seasons, she was the only woman among 20 men.

“When I was a hotshot, I became used to being the only girl on the crew. I felt like I had to prove myself and show that I can work as hard as they can,” says Abercrombie. The burn unit for GSPHS is not nearly as intense as the emergencies the hotshots are thrown into. However, her experience has been valuable, and she encourages women to consider it if they don’t mind difficult physical labor.

“Oh, it’s so hard,” Abercrombie says of the work. “You’re digging a ditch through the mountains, but I like the physical labor. There are a couple women that work with us, and I think it rounds out the team to have them on it. A lot of women are afraid they are not strong enough, but that’s not true. If you like sweat and being outside, it’s one of the best things you can do.”

Prescribed fires are a critical part of the forest management practices GSPHS puts in place each year. If you’re interested in learning about how to become a park ranger or work with the Natural Resources Unit on prescribed burns, please visit our Park Careers web page. 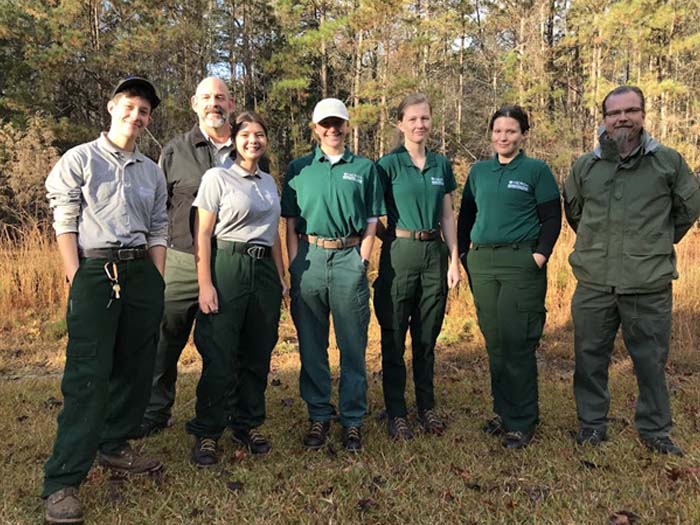 Members of the Georgia State Parks and Historic Sites Resource Crew. Once accepted into the role, they are trained in first aid/CPR, wildland firefighting, and proper chainsaw and ATV use.

Fire Ecology - The History and Evolution of Wildland Fire Use

A user-oriented system for smoke management