The Little White House Historic Site is now showing a newly updated exhibit showcasing the Unfinished Portrait and three accompanying studies. Why is this regarded as one of the most famous and emotionally charged American presidential portraits? 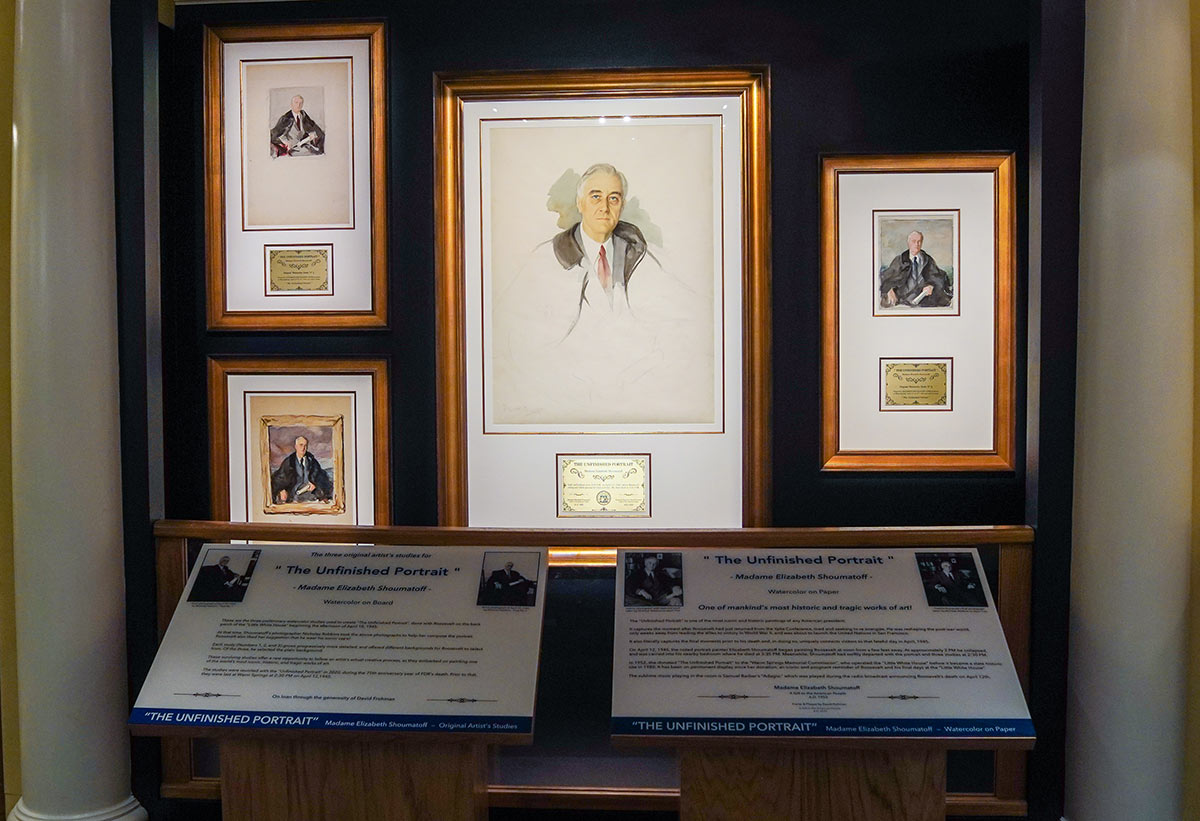 On April 10th, 1945, President Franklin Delano Roosevelt sits on his back porch, enjoying a crisp spring day in Warm Springs, Georgia. Warm Springs had served as a refuge for the president. The springs had a healing effect on his legs, which were nearly paralyzed from a polio infection he sustained in his 30s. He could often be found swimming at the pools with other patients infected with polio, and afterward he would head into town to eat and converse with the residents of the south Georgia town.

Sitting in front of him was the world-renowned portrait artist, Elizabeth Shoumatoff. She had been assigned to paint the president and had spent most of the day working on less detailed versions of the final portrait. These studies allowed her to test the backgrounds, positions, and even the tie color of her subject.
After Shoumatoff and President Roosevelt settled on a white background for the portrait, she began to work on the final piece on April 12. Starting with the piercing blue eyes, she worked outward, painting his face (and maybe omitting a few wrinkles) as she went along. After finishing much of the head and top half of the torso, President Roosevelt began to show signs of physical pain. At 1:00 p.m., he told Madam Shoumatoff they had 15 more minutes left to work. His cousin Daisy Suckley rushed to his side after his head drooped and he placed his hand to the back of his head.

“I have a terrific pain in the back of my head,” he whispered to her. These would be his last words.

News quickly spread that the president was being painted at the time of his death, and the attention Shoumatoff garnered became a nuisance for the shy portrait artist. She decided to donate the Unfinished Portrait to the Little White House foundation, and later given to the Little White House Historic Site, where it still lives today. And now, 76 years after it was painted, the Unfinished Portrait has been reunited with the three studies.

Through the generous loan of David Frohman, visitors of the Little White House Historic Site in Warm Springs, Georgia can view the progression of a portrait artist’s work. When looking at the three studies and the final Unfinished Portrait, it gives a haunting and stirring view into the final hours of President Roosevelt’s life. The Unfinished Portrait has been newly reframed with the most state-of-the-art materials, preserving it for generations to come.

Guests will be able to see President Roosevelt’s second home, commonly referred to as the Little White House, where the Unfinished Portrait was painted. Along with the home still perfectly preserved, visitors can also tour the museum and gift shop, surrounded by the peaceful and quiet grounds of the historic site. Admission is $12.00 for adults, $10.00 for seniors, and $7.00 for children. Visit their website here, or call them at 706-655-5870.